In the September issue of Track & Field News, available for purchase now, we take a look at the boom in men’s 200 running this season and last. We asked questions of athletes and coaches close to the event, including Tyson Gay, Ato Boldon, Lance Brauman, Jon Drummond and Clyde Hart.

One man whose opinions we really hoped to include was the current World Record holder, the man whose 19.32 boggled the sport’s collective mind at the Atlanta Olympics, Michael Johnson himself. Johnson was on vacation when we first tried to speak with him, but has since weighed in with some illuminating commentary.

Below you can read what MJ had to say.

T&FN: Why do you think we’ve suddenly seen so many 19.6s in the past year?

Johnson: I think the 200 meters was far behind other events as far as progression. Tommie Smith ran 19.8 in 1968, and in 1996 when I first broke the record it was still 19.72. And since I had retired in 2001, Frank Fredericks suffered injuries, guys like John Capel and Ato Boldon retired and left the sport, just running under 20 was considered impressive. After that great race in Lausanne last year where Xavier Carter ran 19.6 it made guys who are already very talented 200 meter sprinters wake up and realize that they can run faster and the 19.6 is not impossible.

T&FN: Do you feel like your 19.32 is the Beamon-esque record of our time, or do you believe that we should expect this crop of young sprinters to get close in the next few seasons?

Johnson: I believe both are true. It’s Beamonesque because it was broken by so much and we probably won’t ever see it broken by that much again. But I also feel it can certainly be broken and its possible Tyson Gay, Wallace Spearmon or Xavier Carter could break it. But the only one that is consistent right now in that 19.6 range is Tyson.

But you have to keep in mind that 3 tenths of a second is a very long way and most people will never take that much off their PR in the 200 over their entire career after they’ve reached world class.

T&FN: Ten years ago didyou think you’d see the record broken in your lifetime by anyone else? Has your view on that changed?

Johnson: My view on records is that you never know when they might be broken because the likelihood of breaking a record cannot be judged on the then current group of athletes. You never know when an extremely talented athlete who works hard and understand his race well enough to move the WR forward will come along.

T&FN: Do you feel that other sprinters of your generation “gave up” on the 200
after your 19.32? Did that surprise you?

Johnson: I thought it was soft and way overdue to be broken. Further to how difficult it may be for these guys to break it even though they’re running consistently fast is that I ran consistently at 19.8 and 19.9 throughout 1990 and 1991 and ran 19.79 in the 1992 Trials and then again at the 1995 World Champs before finally breaking the record in 1996.

Johnson: It could be either. Wallace and Xavier are both 200/400 and Tyson is 100/200 and all three are great. I would have leaned more toward 200/400 but not because those guys have a better chance but because most 100/200 guys look at the 200 as secondary and don’t add the speed endurance component to their training that’s needed for the 200.

T&FN: Do you think that Tyson Gay or anyone else in the current crew has what it takes to really challenge the 200 WR?

Johnson: Gay, Spearmon, and Carter all have the makings of great 200 runners, and already are great, but that doesn’t mean that every race they run is a World Record attempt.

T&FN: In your opinion, what will be the most important aspect of sprinting that Gay or any of these other guys who’ve run 19.6 will need to further develop to approach 19.32?

Johnson: It’s different for each one. Tyson needs speed endurance work. Spearmon needs a major overhaul of his race strategy. Carter needs to clean up his technique. Those are starts but I don’t know any of their training programs.

T&FN: You ran the WR in lane 3. Do you think you might have run faster if you had been in 5, say? Or 8? If you’d been able to choose your lane in Atlanta, which lane would you have chosen?

T&FN: I think you used to choose lane 5 or 6 when you had a choice. When you see performances like Xavier Carter running 19.63 in lane 8 last year and J.J. Johnson running unexpectedly fast in lane 9 in Brussels a few years back, do you now think outside lanes are more advantageous in the 200? Or is that idea overblown?

Johnson: It depends on if you are a poor curve runner. Many guys are and would rather run outside than master running the curve. That’s a mistake because at championships lanes 3-6 [go to] the favored and not 5-8. The worse the guy runs the curve the more the advantage of running on the outside. I mastered the curve so I like being inside some other guys to use them as rabbits to run the curve even faster. 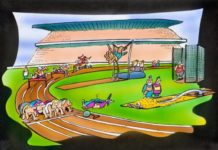 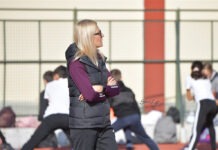